Created 16-Apr-17
I have photographed Grand Central Terminal several times. Having met Dan Brucker, and going on a tour with him was the best experience. Going to the power station, 9 stories down...
**
Steam engines generate their own power. Electric engines must get it from power plants. In 1910, the railroad built a state-of-the-art electrical substation on 50th Street that converted the city’s alternating current electricity to the direct current used by locomotives.
The facility also featured 14 coal-driven boilers producing hot water to heat Grand Central and neighboring buildings.**
http://www.gcthistory.com/

Going to FDR's Train was so interesting.
**
An unmarked, nondescript door off Park Avenue in Midtown Manhattan leads down to a shadowy train tunnel with a storied past.
It once covertly carried a United States president from Grand Central Terminal to the Waldorf Astoria hotel.
Follow the tunnel today, and you'll find it still leads to the railroad car used by POTUS number 32, Franklin D. Roosevelt.
This is Track 61, the first stop on a secret subterranean tour of New York enjoyed by a very lucky few, as tourists and locals hurry about on the streets above, oblivious to those standing in the midst of history below.

One of the best parts of this tour, given by Dan Brucker, was access to the glass walkways.
*there are walkways in the massive windows of the terminal! You might see someone crossing right between the glass windows on either side of the main area. The walkways connect the offices above Grand Central so the employees don’t have to walk through the busy terminal. 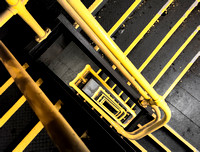