Created 1-Jun-15
Modified 15-Sep-22
Visitors 58
37 photos
***Asher Selig Grossinger moved from New York City to Ferndale in Sullivan County in the Catskill Mountains in the 1900s. There he rented rooms to visitors from New York City. His wife, Malke, operated the kosher kitchen, and Jennie Grossinger (1891–1972), his daughter, was the hostess. They called their home Longbrook House. In 1919, they sold it and purchased a bigger house on 100 acres calling it Grossinger's Terrace Hill House.
In 1952, Grossinger's earned a place in the history of skiing as the first resort in the world to use artificial snow. By the time Jennie died in 1972, the hotel had grown to 35 buildings on 1,200 acres that served 150,000 guests a year. It had its own airstrip and post office. During his fighting days Rocky Marciano would train at the resort. But in the late 1970s and 1980s, resorts like Grossinger's or theConcord could no longer attract younger guests.
In August 1984, Grossinger’s, in its dying years, promoted a Woodstock weekend to mark the 15th anniversary of the festival. It featured a workshop in tie-dyeing, a musical performance by David-Clayton Thomas, formerly of Blood, Sweat & Tears, a midnight showing of the four-hour documentary "Woodstock," and an appearance by John Sebastian, who advised, "Don't eat the purple tzimmes." Abbie Hoffman, who was thrown off the Woodstock stage by Pete Townshend of The Who for making a political speech, was brought in by Grossinger’s for the promotion.
In 1986, the Grossinger descendants sold the property to Servico. Grossinger's main hotel and main resort areas closed in 1986, but the golf course is still open as of 2014. The members of the golf clubhouse call the course "Big G". Servico failed to reopen the hotel due to the massive costs associated with it. Numerous other companies also failed the same feat. It is owned by Louis Cappelli as of September 2013, who is hoping for casinos to come to the area.***
http://en.wikipedia.org/wiki/Grossinger%27s_Catskill_Resort_Hotel
Categories & Keywords
Category:Architecture and Structures
Subcategory:Buildings
Subcategory Detail:
Keywords:abandoned, catskill, catskills, exploration, grossinger, grossinger, hotel, mountains, resort, resort, urban, urbex
© Roni Chastain Photography 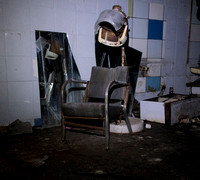