Created 16-Dec-21
Modified 15-Sep-22
Visitors 311
77 photos
Deep in the Nevada desert sits Nelson Ghost Town, one of the most famous ghost towns near Las Vegas.
This historic landmark located about 45 minutes away from Sin City, and is considered to be one of the most famous Nevada ghost tows. It attracts plenty of photographers and filmmakers because it looks like it was taken straight from the Wild West.
The ghost town is just a small piece of property located along the main road near Eldorado Canyon. Here, you can tour Eldorado Canyon to learn the history of mining in the area or spend time taking photos of vintage cars, rusted out gas pumps and old barns.
Nelson Ghost Town History
Nevada has a rich mining history and the state is literally peppered with abandoned old mines.
However, Nelson Ghost Town is different.
While there are plenty of no-name ghost towns throughout the state, the historical Techatticup Mine is the oldest and most famous gold mine in Southern Nevada.
The Spanish discovered gold in this area around 1775 and back then, they called it El Dorado Canyon. But it wasn’t until 1859 when prospectors that had come here from all over the country started finding gold and silver in the area. That’s when several mining camps including the Techatticup Mine had been set up. The dark side of Nelson Ghost Town
Soon, other minerals such as lead and copper were discovered in the area.
The place located in the middle of nowhere and cut off by miles of the harsh desert terrain often saw violent conflicts that were spurred by ownership and right disputes. Lawlessness was a normal thing at Nelson as the place attracted fortune seekers from all over the continent some of whom were deserters from the American Civil War.
Nelson was eventually abandoned when the area was hit by the flash flood and the torrents of gushing water flushed away the precious fossils that attracted so many people here.
Categories & Keywords
Category:Travel and Places
Subcategory:North America
Subcategory Detail:United States of America
Keywords:Ghost, Ghost, Las, Nelson, Town, Vegas, abandoned, areas, buses., cars., exploration, old, old, there, town, travel, travel
© Roni Chastain Photography 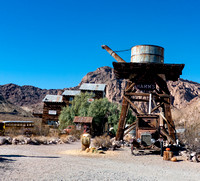 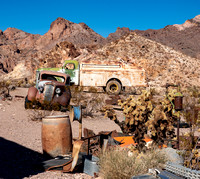 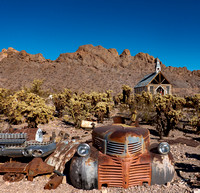