Created 10-Nov-13
Modified 10-Nov-13
Visitors 5
26 photos
**The Woolworth Building was designed in the Gothic style neo-Gothic style by the architect Cass Gilbert, who Frank Woolworth commissioned in 1910 to design a 20-story office building as the F. W. Woolworth Company's new corporate headquarters on Broadway, between Park Place and Barclay Street in Lower Manhattan, opposite City Hall. Originally designed to be 420 feet (130 m) high, the building was eventually elevated to 792 feet. At its opening, the Woolworth Building was 60 stories tall and had over 5,000 windows. The construction cost was US$13.5 million. With Irving National Exchange Bank Woolworth set up the Broadway-Park Place Company to finance the building, but by May 1914, had purchased all of the shares from the bank, thus owning the building outright. On completion, the Woolworth building topped the record set by the Metropolitan Life Insurance Company Tower as the world's tallest building.
The building opened on April 24, 1913. President Woodrow Wilson turned the lights on by way of a button in Washington, D.C. that evening.**
http://en.wikipedia.org/wiki/Woolworth_Building
Categories & Keywords
Category:Architecture and Structures
Subcategory:Buildings
Subcategory Detail:
Keywords:architecture, building, landmark, nyc, woolworth, woolworth
© Roni Chastain Photography 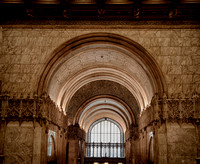