Created 23-Nov-14
Modified 15-Sep-22
Visitors 11
39 photos
The Loew’s Valencia movie palace, one of five flagship Wonder Theaters opened by the Loew’s chain in and around New York in the late 1920’s (a time when an elevated subway used to run along Jamaica Ave).

The Loew’s Wonder Theatres were created in the late-1920s for movie-goers for whom midtown Manhattan wasn’t easily accessible. The Valencia was the first of the five to open on January 12, 1929.

Right off, the towering arched ceiling sets the tone, literally the total polar opposite of what a movie-going experience is like today.
In a 1990 article, the NY Times designed this as “more Persian than anything else, a riot of scupltured, gilded plaster screens and balconies.” The balconies line both walls…

The Valencia was the work of architect John Eberson, who designed nearly 100 movie palaces around the world, most described as “atmospheric” for their over-the-top, exotic decor. Sadly, many are long gone, razed to make way for new development in an age where such a theater could house twenty screens instead of just one. The Valencia is largely considered to be the most elaborate of all his New York theaters.
Categories & Keywords
Category:Architecture and Structures
Subcategory:Churches
Subcategory Detail:
Keywords:Valencia, church, loews, loews, of, palace, palace, prayer, tabernacle, theatre, theatre, theatres, turned, valencia
© Roni Chastain Photography 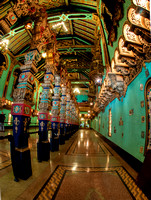 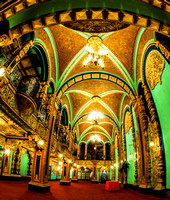