Created 22-May-12
Modified 29-Sep-20
Visitors 165
35 photos
***The Stanley Warner Company and Herbert Effinger commissioned renowned and prolific theater architect William H. Lee to design a 1300-seat movie theater in the heart of Lansdowne’s Central Business District. Based in Philadelphia, Lee designed more than 80 movie houses one as far away as Hawaii. Designed in the popular Hollywood Moorish style, the $250,000 theater was opened just before the advent of the “talkies” and harkens to the days of romantic silent films. Visitors moved through the front doors, up an incline, and into a Moorish style courtyard with fountains at each end. Large lighting fixtures hung in the lobby, which opened to the grand auditorium. With its elaborately painted ceiling, grand chandelier,balconies, and large proscenium, the theater is a feast for the eyes.

The Lansdowne Theater opened on June 1, 1927, featuring the silent film “Knockout Riley” starring Richard Dix. The opening event was overseen by John J. McGuirk, president of the Stanley Company, the predecessor of Warner Brothers. Mr. McGuirk described The Lansdowne as “the best example of suburban theatre construction around Philadelphia.” Adding to the excitement of the day was an appearance by Miss Lansdowne, who flew over the theater in a biplane, dropping roses to the audience below. (That year Miss Lansdowne happened to be an exchange student from Sweden.) Films were shown Monday through Saturday at 2:30, 7:00, and 9:00 p.m. Ticket prices ranged from 15¢ to 35¢.*** 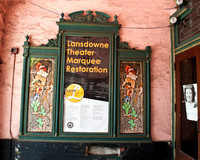