Origins
Samuel J. TildenThe origins of this remarkable institution date back to the time when New York was emerging as one of the world's most important cities. By the second half of the 19th century, New York had already surpassed Paris in population and was quickly catching up with London, then the world's most populous city. Fortunately, this burgeoning and somewhat brash metropolis counted among its citizens men who foresaw that if New York was indeed to become one of the world's great centers of urban culture, it must also have a great library.
Prominent among them was one-time governor Samuel J. Tilden (1814-1886), who upon his death bequeathed the bulk of his fortune -- about $2.4 million -- to "establish and maintain a free library and reading room in the city of New York."
** 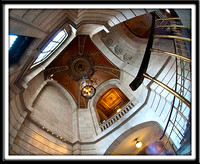